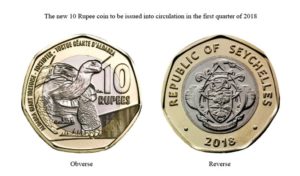 MegChem was recognized for the independent investigation on the rupee coin degradation, completed for the Central Bank of Seychelles (CBS). Two local newspapers mentioned the MegChem / SecMet involvement – “Today in Seychelles” and “Nation”. Confirming proof of our local competence in root cause analyses and the provision of global metallurgical solutions for our delighted client.

A new batch of ten rupee coins will be introduced to replace the batch released in December 2016.

The new coin will have the same design and colour but a different metal content and year as the coins currently in circulation.

This decision follows a mutual agreement between the Central Bank of Seychelles (CBS) and its UK-based coin supplier, The Royal Mint, as it was observed that the coins showed signs of accelerated tarnishing and rusting.

Following tests conducted by The Royal Mint as well as independent tests conducted by MegChem (Pty) LTD based in South Africa which cost CBS R60,000, the results have attributed this anomaly to the effect of our humid climate on the metal composition of the coin.

In a press conference with CBS Governor Caroline Abel, The Royal Mint director of sales Simon Lake and the CBS head of banking services Mike Tirant stated that 5 million pieces will be produced and circulated during the first quarter of 2018.

The new metal composition, which will be nickel plated and nickel brass as opposed to the 2016 coin which was composed of nickel plated steel and brass plated steel, is expected to be more resistant to Seychelles’ climate.

Mr Tirant said the majority of the coins are performing very well as only 3% of the coins had been affected according to the test results.

But CBS stopped producing the coins as of January, but it had already issued 1.9 million 2016 ten rupee coins which cost R1.6 million.

“1.5 million pieces of the 2016 ten rupee coins are being circulated and it is expected to be collected after the new coins are put into circulation, but as there are no visible differences between the two coins both batches will circulate alongside each other and the 2016 ten rupee coins will be gradually taken out of circulation through the normal process of daily withdrawals and deposits by the commercial banks,” he said.

He said as CBS is the purchaser of the coins, it will be bearing the costs of the coin and upon negotiation both parties reached an agreement that the previously agreed price is maintained.

He said they feel confident that the issue they encountered with the coin was a learning curve and it is a way to move forward and ensure they embed certain processes and procedures in the way they produce new currencies.

In terms of the coins falling apart, he said CBS does not have any coins in their possession which has had this issue as they have not been given these coins to examine to see if there have been issues of dismantling of the coins.

“The Royal Mint has done some testing to see how much force is required to remove the inner part and outer part of the coin, which basically requires a large amount of force which cannot be done through normal wear and tear, it has to be something which was tempered with,” he said.

He noted that the handling of banknotes and coins in Seychelles has to be improved as people need to take more care with their money.

Ms Abel reassured the public that CBS is committed to ensuring that all coins and banknotes in circulation are of the highest quality and if any defect is identified with the money it will be rectified.

Mr Lake said it is the first time that The Royal Mint has encountered such an issue after 150 years of service.

“For me it was the right decision to adopt this product initially to reassure you all that we did carry out accelerated and environmental tests before and during production to ensure that these products lasted as a normal plated product would. Unfortunately it appears that the climate in Seychelles and the way that the people use the coins exposes them to sea water which causes this explosion that looks like rust on the surface of the coin,” he said.

The article above can be found on the Seychelles ‘Nation’ newspaper website.