CREEP, CRACKS AND FITNESS FOR SERVICE 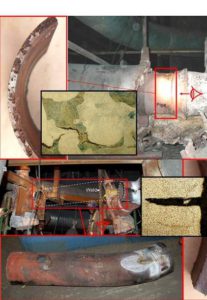 Ronald Koenis, principal metallurgical engineer for MegChem, talks about fitness-for-service (FFS) and remaining life assessments (RLAs) of welded components that operate within the creep range and those with crack-like flaws.

Creep, cracks and fitness for service

With regard to fitness-for-service (FFS) and remaining life assessments (RLAs), he says that theoretical and practical knowledge of degradation processes are combined with knowledge of materials and structural behaviour to establish if continued operation is feasible and safe.

“MegChem is well positioned and experienced with regards to FFS and RLAs. We make use of leading standards and documents such as BS 7910 and API 579-1/ASME FFS-1.

FFS assessments assure continued safe and reliable operation with reduce downtime and the elimination of unnecessary repairs. They offer additional time to plan shutdown activities and can significantly reduce costs.

An RLA, on the other hand, can be performed to establish a retirement or replacement plan for equipment nearing the end of its lifecycle or for equipment that has been in operation for longer than its original design life.

“This also applies to components with crack-like defects,” Koenis says. “The safe remaining life can be estimated based on the critical crack dimensions and the rate of propagation – and the assessments will typically be supported with on-line monitoring.”

Introducing the concept of creep, Koenis says creep can be defined as the slow and continuous deformation of metals at high temperatures below the yield stress. “It is a time-dependent deformation of stressed components and all metals and alloys are susceptible,” he notes

The rate of creep damage accumulation is a function of material, load and temperature. “An increase of 12 °C or 15% in stress can reduce the remaining life of component by half or even more – depending on the alloy,” he points out, adding: “Creep behaviour is relevant above four-tenths of the melting point (0.4 Tm) and it is often mistaken for creep embrittlement when little or no plastic deformation is discerned. In addition, increased stress due to a loss in thickness from corrosion will reduce creep life exponentially.”

Displaying a typical creep curve, he says that the creep life to failure can be split into three distinct stages: primary creep, where the elongation or deformation rate decreases with time; secondary creep, which is an extended period of nearly constant creep, which is generally the region of engineering interest for RLAs; and tertiary creep, the stage when the accumulated reduction in the cross-sectional area results in an acceleration of elongation towards failure.

“A typical creep curve can be split into three distinct stages: primary, secondary and tertiary creep.” 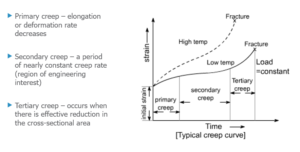 While at temperatures well above the threshold limits, noticeable creep deformation or bulging may be observed, the initial stages of creep may only be identified by using SEM or optical metallography, with damage manifesting as voids at grain boundaries. The void density is indicative of the severity of the creep degradation. “Micro cracks will develop and creep cracking may occur at locations with high metal temperatures and stress,” Koenis explains.

“Neubauer, B et al. “Proceedings of the 2nd international conference on creep and rupture of engineering materials and structures”, Pineridge Press, Swansea, 1984, page 1226-1271.” 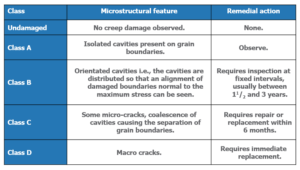 For measurement and testing, MegChem collaborates with the CSIR for the use of its extensive creep testing facilities, which has at its disposal six constant load rigs for testing to temperatures of 1 200 °C as well as Laubinger creep rigs with gas shielding.

“The results are used to calculate Larson Miller Parameter (LMP) values, which can be compared to published values for identifying the relationship between stress and LMP.

“The LMP is a single value that reflects the creep rupture strength of alloys as a function of applied stress and is used for the determination of design creep curves for steels. The parameter incorporates both temperature and time effects as indicated in the equation.

“We prefer to use Omega creep properties, however, which are determined by exposing the creep samples to a stress marginally greater than the operating stress and temperature to ensure approximately 2% to 5% creep strain accumulation within 1 000 hours,” says Koenis.

Omega creep samples are not tested until failure, but until sufficient creep strain has been achieved within the secondary creep stage – where constant strain rate prevails.

Advantages of OMEGA creep testing include: much quicker availability of results – one to two months compared to three to four months for the LMP method; fewer samples are required – theoretically only one sample can be used to predict remaining creep life; and from known omega and ISR values, the creep life fraction consumed to date can be theoretically determined. 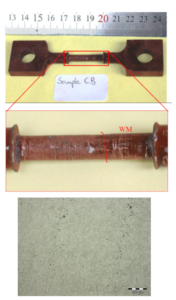 Koenis goes on to point out that other temperature related degradation mechanisms must also be looked at: Spheroidisation and/or softening, for example can occur when the unstable carbide phases in carbon steels agglomerate from their normal plate-like form to a spheroidal form, or when small finely dispersed carbides in low-alloy steels such as 1Cr-½Mo form into large agglomerated carbides.

Crack-like defects could also be considered during a fitness-for service  assessment, including: mechanical, corrosion and thermal fatigue cracks, due to cyclical stress; and stress corrosion cracking, caused by the interaction between tensile stress and a specific corrosive medium to which the metal is sensitive, for example.

“FFS assessments, which are almost always coupled with RLAs, provide technically sound approaches that ensure the safety of plant personnel and the public in an environment where aging equipment continues to operated,” Koenis notes. “The assessments provide inputs for decisions to continue to run as is, or to alter, repair, monitor, retire or replace the equipment,” he adds.

Citing some examples, he relates a creep-related Level 1 screening assessment experience based on published creep material behaviour. “A localised hotspot was identified that had been prevalent for one month (744 hours) on a vessel at a processing plant. A thermography survey showed a maximum temperature of 536 °C in the carbon steel shell and FEA calculations indicated stress at approximately 40 MPa in the affected region.

With regard to Level 2 and Level 3 creep FFS and RLAs, he says that reference stress solutions can also be applied for Level 2 assessments. “FEA models that extract the peak stress values can be considered, however, due to creep strain, stress redistribution may follow, so for RLAs membrane stresses are preferred,” he says.

“If actual material condition or Omega properties are ascertained during the analysis, past operation can be ignored, but future corrosion allowances and rates should be incorporated. If no actual data is available the approach must also consider past creep damage fractions over various load or temperature periods as indicated by the histogram.

Koenis goes on to describe a Level 1 and Level 2 crack-like-flaw FFS assessments as well as a leak-before-burst (LLB) assessment. “The LBB approach should not be applied when the crack growth rate could potentially be high, since when a leak occurs there should be adequate time available to detect the leak and take the necessary action,” he advises.

Concluding, he says that FFS assessments can provide a significant financial advantage in terms of repair and downtime. “However an FFS should preferably only be considered in situations were repair or replacement cannot be performed,” he suggests.

A high level of conservatism is incorporated into the typical screening approach of Level 1 assessments, in accordance with API 579-1. Should a Level 1 assessment not confirm FFS,  a Level 2 and/or Level 3 assessment may be performed, which could have a different outcome.

“Sensitivity analyses should always be included in remaining life assessments to demonstrate confidence in the calculated remaining life,” Koenis concludes.